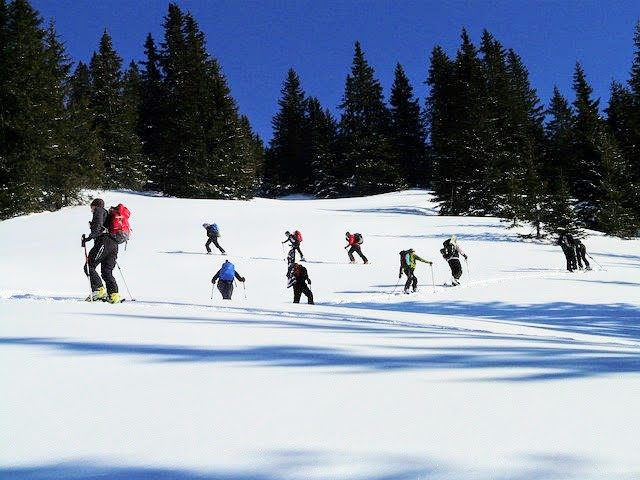 Be friendly. Or at least don’t be an a$$hole. Everyone is out in the backcountry to have some fun so why ruin that? Sure you might have a serious objective in mind but that’s no reason not to say hello to a passing group.

Fill in your snow pits. A run can be ruined in a hurry if you encounter an open snow pit at speed. So take 5 minutes after digging a pit to fill it back in, even if it’s small or out of the way.

Don’t crowd other groups. Especially when transitioning. If everyone is parked on a narrow ridgetop to rip skins off, there may not be much room to maneuver. Bumping into someone in this scenario could send them tumbling, so be aware of your surroundings. “Don’t crowd” also applies on the skin track. Leave some space behind a group until you can safely pass them. See also: ass-camping below.

Share. A lot of backcountry skiing areas are on public lands that are used by hikers, snowshoers, etc. Occasionally you might see people on snowshoes following a skin track. There is absolutely nothing wrong with this. Skiers and splitboarders don’t ‘own’ a skin track they set. You have every right to be upset if a group follows your skin track and then drops in below you and poaches the powder you were eyeing up. But snowshoes do very little (if any) damage to a skin track and they aren’t going to steal your pow line. We’re all just out to enjoy nature so see point one above…be friendly.

Don’t poach lines. Say you followed a skin track up that a group ahead of you set. They’re heading to the top of the slope, and you’re considering dropping in below them before they reach the top. If you do this, don’t ride where they are planning to. They did the hard work of setting the skin track, so respect that and don’t poach the untouched pow they’ve worked so hard for.

Leave the headphones and speakers behind. Headphones aren’t really something you should be using in the backcountry. You should always be listening to what’s going on with the snowpack and your group. With headphones in, you might miss a very important sign of instability. Same deal with portable speakers (yes, I’ve seen this). Even though your group might be happy to hear some tunes, you could be missing life-saving signs from the snowpack.

Etiquette on the Skin Track

Don’t post-hole the skin track. This is one rule you’ll hear very often, and for good reason. Holes in the skin track means way less grip for skinning. The generally only really matters in steep areas, but it’s good practice everywhere. Just step off the skin track if you’re not on skis. Easy. The one exception is if your skins fail or a binding breaks or whatever and you have to bootpack. In deep snow you can become exhausted pretty quickly, so using the skinner will save some energy. To be clear: in a life or death situation (this is the key point), post-hole the heck out of that skin track.

Leave some space in front of you when skinning. Fart-sniffing. Ass-camping. Both terms refer to people who feel the need to stay right on your tails on the skin track. I find a good whack with a pole every time the person behind you hits your tails does the trick (I’m only half kidding here).

Help break trail. Breaking trail is really tiring. If you’re in a group, rotate through who is in the lead every once in a while to share the load. When you catch a group ahead of you, you can offer to help break trail for them too. They may not always be keen, so feel free to break your own trail if you want to pass them.

Don’t block the skin track. When you need to stop for a break or shed a layer, move off to the side. In trees, a group can come up behind you without you noticing and you might have a hard time moving if your pack is wide open on the skin track in front of you. Of course, if you can see behind you for a good distance don’t worry about this. The idea is just to not block the lane. It’s a bit like driving…you wouldn’t stop in the middle of the road to check google maps, right? Riiiight??

I think that’s about enough for now. If I’ve missed anything or if you disagree with any of these, feel free to let me know in the comments. And remember, stay safe but have fun out there!