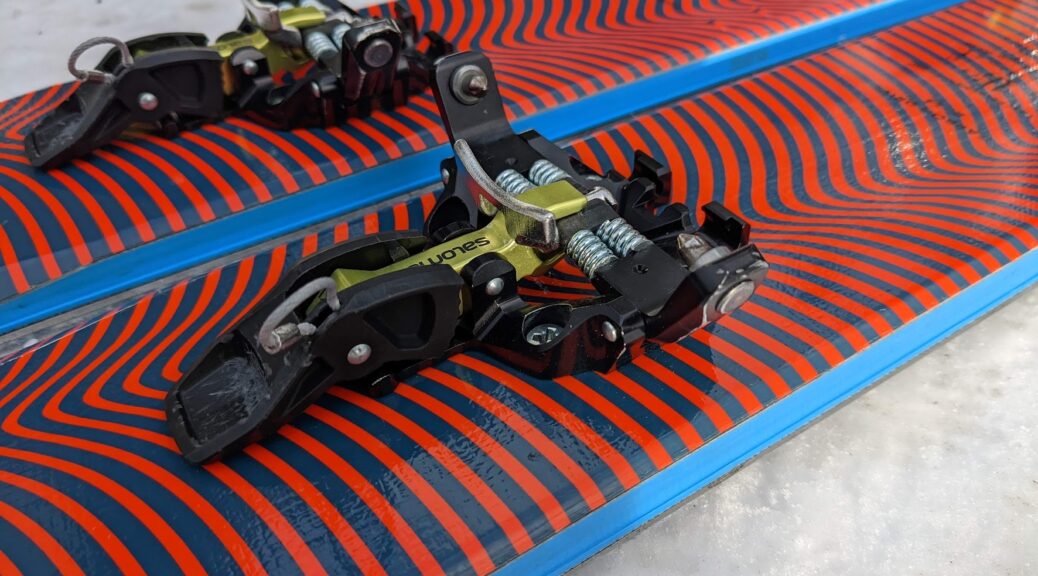 After a couple of seasons of backcountry skiing on the Salomon MTN pin bindings I’m ready to share my thoughts. In short: simple, light, and solid (with one caveat I’ll get into below). The toe clamps are crazy strong, the lifters are easy to use, and they climb and ski like a traditional pin binding. Which is mostly good but can be bad in some scenarios – hard pack in pin bindings is never great. But hard pack isn’t what these are bindings are intended for.

The MTN binding suits my needs pretty much perfectly but they won’t be ideal for some skiers. To save weight, Salomon limited the release adjustability by using a replaceable U-spring. Unfortunately the spring only comes in 3 flavors, so really light or really heavy skiers are out of luck. And if you aren’t a fan of the ‘direct’ feeling of a pin binding you may want took at a different set of clamps.

Salomon has been making excellent alpine bindings for almost as long as I’ve been alive. It’s no surprise that they decided to dip their toe into the light(ish) alpine touring segment of the market. And boy am I glad they did. The Salomon MTN / Atomic Backland (same binding, different graphics and name) is a solid piece of kit.

It has been available for quite a few years now and Salomon recently tweaked the design. The differences are slightly beefier toe wings and heel tower. This review is based on the original version and the fact that Sally only made minor tweaks is a good sign (if it isn’t broken, don’t fix it).

Salomon didn’t try to reinvent the wheel with toe of the MTN/Backland binding and that’s a good thing. It’s a simple design that looks like a fairly traditional tech toe and is pretty much entirely metal. The ski/walk lever is the only plastic bit and even it has proved to be durable.

My favorite thing about the toe piece has to be the springs. They are strong af. The amount of force required to close or open them is noticeably higher than Dynafit ST or G3 Zed 12 (the other pin bindings I had on hand to test side by side). I have definitely forgotten to lock the toe more than once when touring but I’ve never popped out, even on steepish side hills. In theory you could leave the toe unlocked when touring in terrain where that might be beneficial.

Stepping into the MTN is pretty straight-forward, similar to most other tech bindings out there. A small metal guide helps keep your boot in the right spot, but it can still be tricky to get it right in deep snow. But like all tech bindings, it gets easier with a bit of practice.

There is a leash loop integrated into the ski/walk lever so there’s no fiddling around to find a leash attachment point. There’s also a crampon attachment built into the toe. Salomon crampons are available, but Dynafit crampons also work with the included ‘keeper’ (basically a little plastic clamp that keeps the crampon from sliding around). Unfortunately I don’t have a pic of the keeper thingy…I lost it almost immediately. Plum crampons apparently work too, but I can’t verify.

Like the rest of the MTN bindings, the heel tower is an all metal build with a generous 30 mm of boot length adjustment. Rotating the heel tower takes an appropriate amount of force in my opinion. It feels confidence-inspiring in that it isn’t super easy to rotate, but it isn’t so difficult that you’ll struggle.

One thing that surprised me about the MTNs is that the heel tower rotates independently of the risers. Coming from Dynafit ST bindings, my first instinct was to try and turn the whole tower but this obviously didn’t work out. You have to grip the big ‘middle’ portion of the tower (with the pins) and spin that. The risers don’t move, which is actually convenient in that you can just flip down the mid riser and cover the pins. No need to spin the tower at all if you don’t need flat touring mode.

The risers are a simple but effective design. A smaller riser on top acts as the mid-height and you can flip another riser over top of this for steeper tracks. They’re both fairly quick to grab with a pole handle and you quickly go directly from flat to the high riser with a pole basket.

You also get a true flat mode when using leashes by rotating the heel 90° in either direction, but with brakes your heel is slightly elevated due to the lever that secures the brakes in walk mode. I’ve found both ‘flat’ modes to be just fine for long flat approaches provided your boot has enough cuff movement (most semi-modern touring boots do).

Salomon gives you the choice of going with leashes for a simple, light setup or with brakes for a slight weight penalty (~95 grams). I should point out that the leash model is ~$50 cheaper. If you opt for leashes, you can also mount the heel without the stomp pad to get an almost flat ramp delta if that’s your thing. The leash also works as a spacer to get the correct heel gap (4 mm) which is a nice touch.

I’ve had these set up both ways and they both work well. The leashes are fairly short and don’t have a break point, so it’s very possible you could get tangled up in your skis in a crash. The brakes mount under the heel tower and require one additional screw in front of the heel. The walk/ski lever looks similar to the one on the Shift binding, but this one has been way more effective. It actually holds the brakes in place, where on the Shifts I find my brakes pop loose at least once a tour.

Weighing in at a hair under 300 grams without brakes, the MTN tech binding is on the lighter end of the spectrum (ignoring ‘race’ bindings). Although important, weight isn’t the only factor that affects how a binding feels when skinning. But I’m happy to report that with heels free, the MTN feels great. It’s a tech toe so the pivot point feels fairly natural and as I mentioned above the toe springs are strong. Even with toes unlocked they stay solidly attached to your boots.

Flipping the risers up/down is a simple affair with a pole grip or basket. And with the high riser you’ll be in a good position for steeper skin tracks.

If you’ve skied an ‘old-school’ tech binding with no elasticity you have a fairly good idea of how these are going to feel. Direct is a good way to describe them. The ramp delta is around 9.5 mm, so a slight forward lean but you can flatten this with leashes by omitting the stomp pad.

In soft snow I have absolutely zero complaints skiing the MTN. Driving biggish skis has been no problem (I had these on Candide 3.0s for a season, which are 108 underfoot) and they feel very connected with the ski. I haven’t noticed any play/slop in the heel (until recently, more on that below) and have had zero pre-release issues when charging fairly hard.

On hardpack snow…well they’ll get you down the hill and keep you attached to your skis but they’re harsh, like many other tech bindings. I wouldn’t consider these for a 50/50 binding.

One compromise Salomon made to keep weight down is to limit the release adjustment range in the heel. Many tech heels now have continuous adjustment from 4-10 or 4-12, but the MTN only has 3 discrete release values. Release pressure is adjusted by swapping out the u-spring in the heel. Thicker u-spring, higher release value (basically the resistance of the metal to bending determines release pressure).

The MTN binding comes with 3 sets of u-springs they call Women, Men, and Expert. This translates loosely to light, medium, stiff and from what I’ve read this equates to something like 6-7, 9-10, 11-12 on a DIN scale. This is anecdotal, but sounds like it’s in the right ball park. I’m ~180 pounds with no gear and ride the Men’s spring (I have big ass feet and usually run a DIN of 9 or 10 on alpine bindings). Stepping into the heel needs a solid effort.

After banging on these bindings for 2.5 seasons (part-time – I don’t always ski these) the heel tower has developed a bit of play where it interfaces with the adjustment track. I can slightly wiggle the heel by hand (on both bindings) and if I really pay attention, I can feel it when skiing on hard snow. When skiing in soft snow it isn’t noticeable at all, but it will be if it gets any worse. I’ll keep this updated if that happens.

This is the only complaint that I have with these bindings, and apparently is a fairly rare issue only with the very first generation of MTN bindings. From what I’ve gathered there have been few reports of this, so I think I just got unlucky.

Many many users of these bindings do not have any heel play and word on the street is that Salomon did a little something to address this in the new generation (can’t confirm…let me know in the comments if you can).

On the plus side, everything else about the MTN has held up beautifully. There is no detectable play in either of the toe pieces. Rotating the heel still needs an appropriate amount of effort and the lifters are still solid.

Despite the durability issue in the heel I encountered, if/when the play gets worse, I’ll more than likely replace these with another set of MTNs. With my own money – these were not given to me or discounted in any way. The pros of these bindings (light weight, easy to use brakes, no pre-release, flat mode, 2 risers, etc.) are enough to outweigh the small chance of a bit of heel play.

Provided that the limited release ranges work for your weight and ski style, I would highly recommend the Salomon MTN binding as a touring specific binding. There are much better options for a 50/50 backcountry/resort binding but that’s not what the MTN is intended to be. Mount these on some light skis and fly up the skin track to your nearest powder stash. 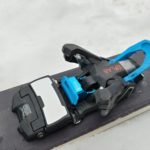 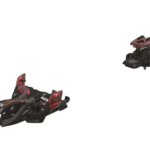 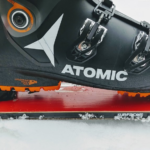 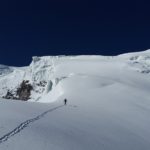 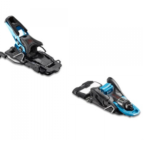